Moviegoers went rampant in summer 2010 trying to explain Christopher Nolan’s mind-boggling Inception. Now the movie’s finally on DVD and you can watch it over and over, analyzing it again and again. But you still can’t figure it out. What the fuchsia happened? 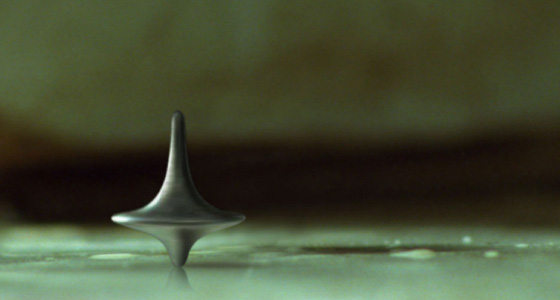 Was it just a dream?

PART ONE: BASIC PLOT (stop reading if you haven’t seen Inception yet…)
1. Leonardo DiCaprio is Cobb, who understands the power of inception – trying to inspire a thought so deeply in the subconscious that the dreamer creates the thought himself.
2. Cobb learned inception as he was studying dreams with his wife Mal. However, they end up getting lost in the dream world to the point of “limbo,” where time and space is awash.
3. In limbo, Cobb realizes they are still dreaming but Mal has accepted their new world (that they can create themselves, since they are dreamers) as reality. To get Mal to snap out of it, he uses inception to convince her she needs to kill herself to wake up. When they do finally wake from reality, however, Mal still has this concept that she’s dreaming and commits suicide.
4. Cobb is accused of murdering Mal and flees the country, leaving his kids behind. To buy his way back into the country, he takes an offer to commit a grand inception for Saito. Their plan is to tap into Fischer’s unconscious and inspire the thought that he needs to break up his father’s company – Saito’s competition.
5. The grand inception is so complex (and further complicated by Fischer’s training against dream invasions) that they have to create several dreams within a dream. To do this, Cobb uses a team that includes Saito, Ariadne (Ellen Page), Arthur (Joseph Gordon-Levitt), Yusuf and Eames.

PART TWO: THE RULES OF INCEPTION
1. Totems are physical items unique to the person holding them to determine whether or not they’re in a dream. For Leonardo DiCaprio’s character Cobb, it’s a top that spins infinitely if he’s dreaming. If he’s awake, it topples over eventually.
2. The Architect designs dream levels in the real world, and then teaches the level design to the dreamer. Once you’re in the dream, though, everything else is filled in by the dreamer.
3. Paradoxes, logical fallacies that can’t exist in reality, only exist in dreams. The never-ending stairs is obviously something that never happens in real life, but it can certainly happen in your unconscious world.
4. Catharsis found in a dream is just as real as catharsis found in reality. On the bonus features of the DVD, there’s a documentary on dreaming by Joseph Gordon-Levitt where one interviewee explains that he quit smoking because he dreamed so vividly that he had contracted lung cancer and started coughing up pink stuff.
5. When you’re dreaming, time moves slower than it does in real life. Yusuf’s sedatives are so strong that the dream world travels at about 1/20 as fast as real time. In other words: if they’re asleep for an hour in the real world, then they’re in the first dream for 20 hours, and in the second dream for 400 hours (over two weeks), and so on.
6. You can only wake up by a kick. Getting killed will do that, but if sedatives are being used it will only send you to limbo, a collective unconscious world. The preferred method seems to be the sensation of falling.

PART THREE: WHAT HAPPENED IN THE BIG DREAM?
1. In “reality,” all the main characters are on a plane. Cobb slips a sedative in Fischer’s drink and the group hooks together into a dream to begin inception. They are asleep for less than 15 hours.
2. In dream level #1, with the van, Yusuf is dreaming. Fischer’s subconscious sends armed hitmen after them as part of his dream defense training. Eames pretends to be Peter. When Saito is shot, he can’t die or else he’ll end up in limbo, but the dying can be slowed in the next dream level.
3. In dream level #2, the hotel, Arthur is dreaming. Here, Yusuf’s driving occasionally affects their world by gravity (the van tumbles) and when the van is in freefall, dream level #2 has no gravity, which is how Arthur can float/fly around the hotel. Here, Cobb tricks Fischer into thinking he’s in dream level #1 and they need to go deeper.
4. In dream level #3, the snow fort, Eames is dreaming. Fischer thinks he has to break into the vault to retrieve the secret his father left him and achieve the reconciliation he never had in reality.
5. In limbo, Cobb finds Fischer being held by Mal as Ariadne goes after them. When Ariadne brings Fischer back to reality, Cobb seeks out Saito to bring him back to reality, too.

CONCLUSION: IT WAS ALL A DREAM
There are lots of crazy theories, including Saito performing inception on Cobb (killer twist, but not plausible) and Ariadne being a therapist using dreams to treat Cobb. However, there’s really only two possible explanations of what’s happening when the screen goes black on that spinning top. Either a) we accept it exactly as the movie offers it, with a mixture of reality and dreams, and the ending is reality, or b) none of it was real and Cobb was dreaming the whole time. And (you’ll hate this) it’s b.

Supporting evidence for Cobb is awake at the end:
– the totem wobbles, indicating it’s going to topple
– Cobb wears a wedding ring throughout the movie but not at the end when he sees his kids

Supporting evidence for Cobb dreaming the whole damn thing:
– the totem wobbles, but it never actually stops spinning
– the totem is meaningless anyway since it’s given to him by Mal, he never uniquely had it; it’s a dream construct
– when Mal commits suicide (supposedly in “reality”), she jumps from the building across from their hotel room; there’s no logical explanation for that except to symbolize their growing distance in Cobb’s subconscious
– the chase in Mombasa is equally illogical when the walls are closing in on Cobb, yet he escapes only to find Saito calmly waiting for him
– Cobb’s children (who never age) are wearing the exact same thing in every sequence
– in limbo, Saito ages but Cobb doesn’t
– various characters repeat the same lines like “leap of faith”
– Michael Caine tells Cobb he’s got to “return to reality”
– dream-sharing itself is an implausible concept, one that could easily be accepted in one’s own dream world
– you never see a beginning to any scene, how they got there, which is how every dream starts

“Is all that we see or seem but a dream within a dream?” – Edgar Allan Poe

Clearly the evidence is weighted… just like Arthur’s loaded dice!

Watch it again. Pretend you know the whole thing’s a dream and ask yourself if any parts of actually seem plausible. If not, that’s because it’s a dream world. Whose dream? Probably Cobb’s. Does that make watching the movie worthless? No, because the dream catharsis is still important – and in the end, he’s able to absolve his guilt over Mal’s death and reunite happily with his kids.