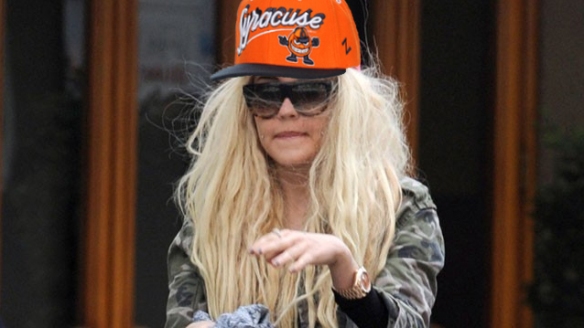 This is a (clearly) Photoshopped picture of former actress Amanda Bynes wearing a Syracuse Orange hat, but you Otto know the truth: She’s not coming to SU.

Attention: Amanda Bynes is not enrolling at Syracuse University next semester, despite what a few Twitter users may believe.

It all started with a May 28 article on Yahoo! News by snarky The Atlantic writer Richard Lawson. It was recap of the starlet’s crazy news that week, including threatening to sue the NYPD for allegedly groping her during her arrest over a bong-tossing incident and claiming her many “you’re ugly” tweets were doctored.

Lawson wrote: “The Amanda Bynes saga continues, as it will until its inevitable end. (Meaning when she gets her act together, enrolls in undergrad at Syracuse, and then after graduation moves to Paris to study architecture.)”

It was a joke — but some are taking it seriously. There has been no other mention or report of Bynes considering Syracuse University in her future, except on social media.

In the past four weeks, there have been at least 50 tweets by people who think the former Nickelodeon star will attend SU as an undergraduate student. Most of the posts came this week and, thanks to the telephone game, some believe the rumors are now fact and she’s already enrolled:

None of the tweets cited any official sources, save for a few people who linked to the Yahoo/Atlantic article. But the author has a habit of making outrageous throwaway jokes in his celebrity gossip articles. In one post last week, he sarcastically referred to Kim Kardashian as a “former NASA engineer who just left a visiting professorship at Cornell” and hypothesized various reasons for the Jonas Brothers’ canceled tour: “Joe is addicted to dolls — he likes the purple ones. Or Kevin has been having marital problems ever since that strapping fireman moved in next door and won’t stop mowing the lawn while shirtless. Or Nick thinks he killed her, he’s not sure, but whatever happened he’s gotta get this body out of this Days Inn and into a shallow grave somewhere. Problems like that.”

How do I know that Lawson’s Bynes comment can’t be taken seriously? Simple deductions and reading comprehension.

For starters, Bynes is not mentally fit to attend college anywhere. She’s been getting intense treatment in rehab facilities since late July, unable to even contact the public for the past three months. (Her last tweet? July 19: “drake is gorgeous.”) And despite making “great strides” recently, she’s also under her parents’ conservatorship until at least Dec. 17.

Further, Bynes hasn’t expressed much interest in higher education. She got her high school diploma in 2004, but the only quote I could find from her even discussing college (“I’ll play it by ear”) was from a PBS Kids interview when she was about 17 years old. (If you find anything more recent, please share.) She announced she was retiring from acting in 2010 at age 24, and three years later hasn’t done much except downward spiral into tabloid fodder.

And finally, if you read the entire May 28 article, you’d see Lawson later admits he doesn’t know what’s next for Bynes. No one does.

Could the former “The Amanda Show” star eventually go to college at Syracuse University or someplace else? Sure. Everyone loves a good comeback story, especially when it involves a troubled former child star. But don’t hold your breath for her to start wearing Orange gear and braving the winters on the SU Hill.