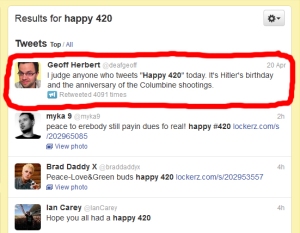 One tweet by @DeafGeoff, sent to 1,532 followers, was retweeted 4091 times and viewed by as many as seven million Twitter users.

April 20th is a day filled with lots of negative history — Adolf Hitler was born on the date in 1889; 19 men, women, and children died in the Ludlow Massacre during a 1914 Colorado coal-miners’ strike; Eric Harris and Dylan Klebold shot and killed 13 (mostly students) and injured 24 more before committing suicide at Columbine High School in 1999; and two years ago BP’s Deepwater Horizon oil well exploded in the Gulf of Mexico, killing 11 and starting an oil spill lasting six months.

The only “holiday” that exists on 4/20 is an informal celebration of marijuana. The significance of 420 to pot-smokers is filled with myths about its origin (FYI, 420 is not a police code used for the drug) but most believe it started with California teenagers who met at 4:20 p.m. to find weed. Today, thousands of cannabis enthusiasts use April 20th to celebrate, smoke and (sometimes) hold political events calling for the legalization of non-medicinal marijuana.

With all of the above in mind on Friday, April 20, 2012, at 6:29 a.m. EST, I tweeted “I judge anyone who tweets ‘Happy 420’ today. It’s Hitler’s birthday and the anniversary of the Columbine shootings.” At the time, I had 1,532 followers on Twitter and slightly fewer Facebook friends.

When I posted it, “Happy 420” may have been trending, but the rest of the topics on Twitter were a hodgepodge of hashtags, news and Justin Bieber (though “Hitler’s birthday” and “Columbine” trended hours later). But my brief complaint about the glorification of a day that’s filled with tragedy, somehow, went viral. 24 hours later, my post was retweeted 4,091 times, copy/pasted by several hundred more, and responded to — angrily — by many who disagreed with me.

I assume the retweets mean those people agreed with me, and it was also favorited by 100+ users and I picked up about 85 new Twitter followers over the course of the day, too. I compared 20 at random, saw their numbers of followers and calculated they had an average of 1,724 followers each. (One person in the sample had 30,400 followers.) 1,724 times 4,091 is more than seven million, which means that my one tweet sent had been seen by as many as 7 million people in just one day, across several countries.

It’s an amazing example of how a small audience can quickly grow on the Internet thanks to the power of social media. Working in radio for a decade, one thing I learned is that more fans means more people who hate you. A musician with five million fans always has way more enemies than an independent filmmaker with five hundred fans, and that’s just a simple fact of life — you’re never going to please everyone.

Here’s a sample of some of the responses I received to my tweet:

I didn’t respond to these messages on Twitter, partly because they were coming in faster than I could, but mostly because there was no point in arguing with strangers who disagreed with me even if only to correct their grammar (or facts). I’m not begrudging people who partake in recreational drugs, either. I may have been overly harsh when I said “I judge,” but I just want real events to be respected, and not ignored at the expense of stoner glorification.