September 5, 2011 would have been Freddie Mercury’s 65th birthday. (Happy birfday, Freddie!) The enigmatic Queen singer was 45 when he died of AIDS in 1991, twenty years ago, but he left behind an awesome library of music that few bands have been able to even measure up to. Whether you want to call it operatic rock, vocal metal, or just straight-up classic rock, the music of Queen from 1973 to 1989 was just phenomenal.

Have you ever met someone who says they don’t like Queen? Or doesn’t know their music?? I hope not. If you ever do, you have two options — either shun them for life and never speak to them again, or have them listen to a dozen songs and show them the error of their ways. Start with these ten songs…

Mercury wrote or co-wrote seven of those ten songs. Of course, usually I write top 5 lists but it’s hard enough to reduce Queen’s music to just 10 great songs. I’d be much more comfortable with a top 25 list, so I could include classics like “Another One Bites The Dust” and “We Are The Champions” and “Let Me Live” and “Killer Queen” and… you get the idea. (I’m not a fan of the Queen + Paul Rodgers or the Queen + Robbie Williams material, but I still respect the musicians’ efforts. It’s just not the same without Freddie.)

By the way, did you know that Freddie’s real name was Farrokh Bulsara? He spent the vast majority of his life in London, England, but he was born in Zanzibar and lived in India for some time. In 2000, when I was 16, I visited London with my family and one of the places we saw was Freddie Mercury’s home where fans have spray-painted the powerful messages of his lyrics along the gate surrounding the house. Here’s a picture of me standing in front of it, next to the title of my favorite Queen song, “I Want To Break Free”: 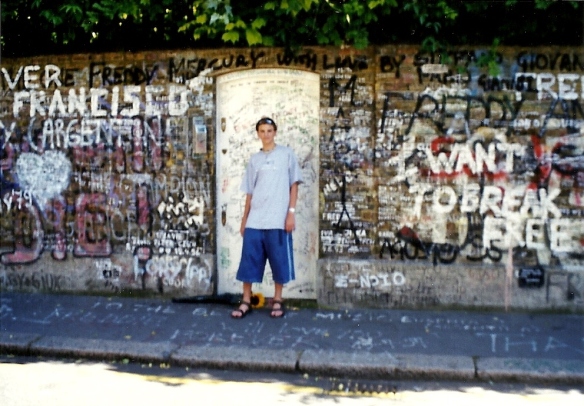 16-year-old Geoff standing outside Freddie Mercury's London home in 2000. Were those shorts ever fashionable?