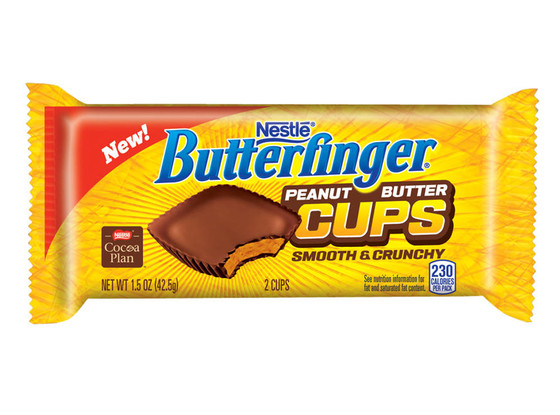 Nestlé is launching Butterfinger Peanut Butter Cups — yes, a mashup of PB cups and Butterfingers — in February 2014. And since teasers for Super Bowl commercials is now a thing, the candy company released a promo video for the delicious-sounding food invention.

A married couple — Peanut Butter and his wife, Chocolate — are in #CupTherapy (brilliant hashtag) to talk about their differences and relationship troubles. Cheese & crackers and fish & chips are having similar issues, but “Nut Butt” and “Choco” may have found a solution to spice things up: Butterfinger Peanut Butter Cups.

According to The Associated Press, it’s Butterfinger’s first new product in more than five years and they’re boldly launching it with a full-length ad during Super Bowl XLVIII on Sunday, Feb. 2nd. More than 100 million people will be watching the big football game on Fox, so the brand is taking a chance by foregoing the celebrity endorsement schtick (sorry, Bart Simpson) that many others are planning on: Ben Kingsley for Jaguar’s F-Type coupe, Scarlett Johansson for SodaStream soda pop, Stephen Colbert for Wonderful Pistachios, and “Seinfeld” stars Jerry Seinfeld and Jason Alexander for some mystery ad campaign.

It’s also Nestle’s first time buying airtime on Super Bowl, famously the most expensive show for advertisers hoping to cash in on the biggest audience of the year. This year, a 30-second spot reportedly costs $4 million, plus whatever price production, marketing and actors (or famous spokespeople) sets them back. It’s a big gamble, but I think Nestle has a shot at making theirs pay off.

Of course, until we actually taste the Butterfinger Peanut Butter Cups, it’s unclear whether it can ever usurp Reese’s Peanut Butter Cups as the greatest Halloween candy of all time. But as someone who loves sweet treats and crazy food mashups, I’m game. I’ve tried pumpkin pie Pop-Tarts (meh), candy-corn flavored M&Ms (tasty), gingerbread Twix (interesting) and candy apple Milky Way bars (yum!) in the past few years, and I’ll definitely give Butterfinger PB Cups a shot. How ’bout you?