A sneak preview of Geoff Herbert’s first feature article in The Post-Standard, appearing in print on Sunday, February 10, 2013.

“Wanna see my picture on the cover, wanna buy five copies for my mother…”

I recently began my new position as Entertainment Reporter at Syracuse Media Group, the new home of syracuse.com and The Post-Standard newspaper. I mainly focus on writing about hot topics that can include movies, music, television, celebrity gossip, technology news and Central New York life. On Friday, I wrote about something a little different that people have asked about many times so it seemed fitting to share:

“#Lipreading Jim Boeheim: How Syracuse basketball gets even more fun on Twitter.”

While everything I write appears online at syracuse.com, I’m excited to say that the piece will also be appearing in print on Sunday, Feb. 10 — my first feature article in The Post-Standard!

I’ll be buying a few copies for family members (Look, mom! I have a job!) but I also recommend picking up one for yourself if you live in Central New York. Not only does it include great photos of the SU coach making his priceless facial expressions, but it’s also a lot better than the first two articles I wrote on syracuse.com in 2010 when I started as an Associate Producer.

Thank you to all for reading and supporting me, and a big thank you to my hundreds of new followers. I’m excited to share with you more lipreading tweets from upcoming Syracuse basketball games as well as stories, news and observations in 140 characters (or less). Let’s go Orange! 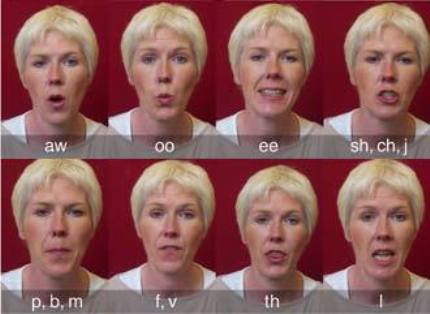 Lipreading: Examples of sounds and what mouths look like when saying them

Twitter is an increasingly fun way to watch live events on TV. By following live-tweets with a #hashtag, you can be watching alone in your pajamas but feel like you’re at a party with thousands of fellow fans who are making interesting observations and comments.

That being said, there’s an important rule for live-tweeting any event — if it’s on TV and being watched by millions, DO NOT TWEET A PLAY-BY-PLAY. Posting “I can’t believe she won that award!” or “And Otis Spunkmeyer passes it to Scrooge McDuck, who scores and puts the Lone Rangers on top” serves no value to a nationally televised event considering other people can watch the same thing — its redundant and annoying. Use Twitter to add a third dimension to the game or show by posting original content or unique reactions.

With that in mind, I started live-tweeting Syracuse University basketball games with #lipreading tweets of what players and coaches, especially Jim Boeheim, are saying when the TV shows close-ups of their faces. Since there’s no audio from them in those shots, I’m adding an extra element to the game that viewers who aren’t deaf and hard-of-hearing likely can’t follow.

I got the idea for specifically focusing on tweeting lipreading (or lip reading, speechreading) from a German deaf woman, Julia Probst, who reads the lips of soccer players and coaches during matches and tweets them, providing fans with a running dialogue that they would otherwise not be privy to. It’s made me enjoy sports more and I hope to continue it with Orange football this fall and other teams I’m a fan of, like the Boston Celtics, New England Patriots and the Boston Red Sox.

Everyone can lipread a little bit, whether they realize it or not — being hard-of-hearing, I did speech therapy as a kid so I could understand speech (as well as speak it better). Lipreading is simply the visual interpretation of the movements of the lips, face and tongue. Without hearing aids, I’m 90% deaf but with lipreading, context and residual hearing I can follow conversations pretty well most of the time.

If you can’t lipread, don’t feel bad — just add something different when live-tweeting an event. Give people a reason to follow you on Twitter.

A few additional notes on lipreading or speechreading: